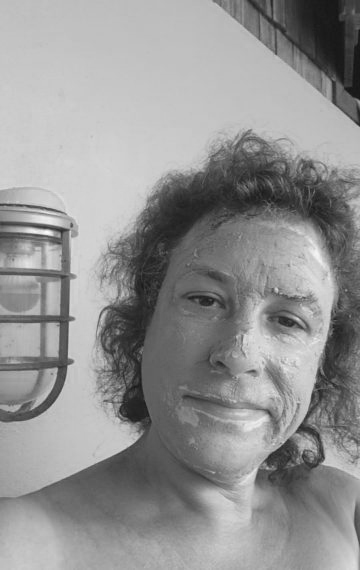 When the email full of pictures arrived, I was eager to open it. The evening — a reception for work — had been a lot of fun and I was looking forward to seeing some professionally-shot photos of myself for a change, rather than a selfie. The first .jpg I opened was, in fact, of me; in it, I was smiling and reaching out to embrace a colleague. I glanced at the image, then frowned, peering at some wispy lines on my screen. Annoyingly, they had settled right over my cheek.

“Darned dog hairs,” I muttered, cutting my eyes toward the perpetually-shedding German shepherd curled at my feet. Reaching for my screen, I swiped at it with the edge of my hand. I had forgotten that my laptop has a touch-screen, and thus was mildly surprised when the image enlarged at my touch.

Surprise melted into shock when I realized that the lines didn’t budge.

Those were not errant dog hairs marring the photo.

Wrinkles! Oh, I recognized the smile, my face crinkled in a familiar grin. But above it, alongside it, I saw furrow upon wrinkle upon fold making their ways up along my cheek, ending below some previously unnoticed crow’s feet. And what was that? A ravine between my eyebrows!

Well, maybe it wasn’t quite as bad as all that, but that’s how it felt: crevasses, canyons, the Mariana Trench, right on my face.

When did this happen? If you, Reader, like I, are “of a certain age,” you know what I’m talking about. We’re so busy … children, work, marriage (divorce). Sure, we know we’re aging. And maybe you were paying attention, but I wasn’t. Overall, I’ve felt the same inside.

I find the same things funny that I always did, my voice sounds the same to my own ears. I’ve stayed relatively fit, so I guess the body shifts have come slowly enough that they haven’t overwhelmed. Time passes, birthdays happen, but I still feel like myself. My same self.

Spoiler alert: time does march on, even when we aren’t paying attention, and all of a sudden, I no longer look like the “me” that I was.

And now, when I look in the mirror, those lines are all I can see.

Oh, I know there are options that would slow the affects of time on my appearance. I could get Botoxed. I could have plastic surgery. Heck, I could probably have my face sandblasted or something. But I suspect that cosmetic treatments would delay, not resolve, my self-acceptance. Botox treats wrinkles, not aging.

But 50 is definitely middle-aged.

Aging is difficult! I get that neither failing to notice, nor obsessing over aging, is a good idea, but I’m stuck in that trough this week. I am seriously hoping that, over time, these peaks and valleys will recede in my mind, because, gosh darn it, they’re going to increase on my face.