You are here: Home / Library / A Parenting Moment, in Which an iPad and a Text Really Cheese Me Off 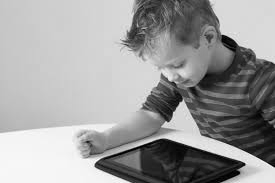 I understand that electronic devices are here to stay, and freely admit partaking of them myself. However, I’m kind of tired of battling against their omnipresence in my children’s lives, particularly that of my youngest. I mean, I try to be realistic about devices’ allure and positive aspects, but wrestling them from the excited clutches of an eight-year-old boy can be tedious. Or frustrating. Or unpleasant. Or, usually, all three.

Concerned about the negative impact all those screens have on their growing brains, physical health and imaginations, though, wrest them, I do. And boy howdy, last Friday night confirmed my views, forevermore.

I was addressing my son and his friend, who were seated in front of a PS3, around dinnertime.

“That’s it, boys. Five-minute warning has passed and you’ve had enough screen time. You’re unplugged for the rest of the night.”

“Mrs. Freeman, we’re almost done. Honest. If we don’t get to the next save point we’ll lose all our progress.”

I demurred, trying to decide whether to express my complete disagreement at whether any amount of even the most skilled video game playing can ever constitute “hard work.”

“It’s a sleepover. Pleeeeeasssse?” Now he was begging.

“Okay. Fine,” I relented. “Six more minutes. But please just turn it off, don’t make me come down to remind you, okay?”

Fingers already flying across the controllers, they nodded in what I took to be not just agreement, but also, thanks.

They did in fact turn off the game and went find something else to do, also known as “going off to play.” I figured they’d turn to the old standards: Legos, lightsaber battles or the timeless “pummeling each other senseless with soft pillows.”

I heard laughter and a jolly sort of shouting interspersed with moments of silence and figured all was well. So I was surprised, and not at all pleased, when I went into my basement to change some laundry and found my son’s guest pecking away at an iPad. My son was not in the room.

He looked up at me, clearly annoyed at my idiocy. “I can’t find him. So I’m texting my mom.”

I know. I know! Where to begin, in unpacking this little vignette? Bemoaning the time-suck of these devices in our children’s lives? Wondering what will become of unfettered play? Resisting that children who come to my home to play with my child now bring along their own entertainment? Accepting that?

No. None of the above.

Let me instead address what is bugging me:

Why, in heavens’ name, would a child turn to someone, to anyone, in another town, for help during a pretty basic game of hide-and-seek?

Why would he even think of it?

Maybe he was looking for hints as to where he should look? He wanted support for his frustration, because he couldn’t find his pal, even in the finite confines of my house? He sought confirmation that games, absent electronic beeps and buzzes assuring you that you are winning, are boring?

Maybe all of that, maybe none of that.

Regardless, what bugs me is that, faced with an undisputedly trivial roadblock — a stalled game of hide-and-seek! — he didn’t shout “I give up!”, or look a little harder, or even decide to quit playing.

Nope. He turned to his iPad.

This child, my child, all children, are forming patterns that will inform their adult relationships. That’s what happens in childhood, right? We become who we will be, for better or for worse. I gotta tell you, when a child decides to look for his screen instead of for his playmate, well, I’m thinking we’re headed for “worse.”

So I’ll keep drawing limits for my son, insisting his time isn’t all in front of that seductive screen. I’ll ask him to play outside, continue to put crayons and paper in front of him and will keep on reading to him at bedtime. Will he benefit, in the end? Will he look for solutions in front of him, rather than in cyberspace? I hope so. If nothing else, I bet he’ll play a killer game of hide-and-seek.