You are here: Home / Library / Ending Homelessness, Never Bet Against the House (Part 2 of 2) 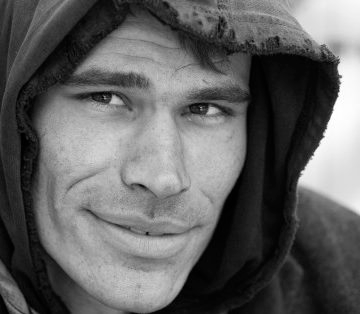 More than two weeks have passed since the nearly-impossible became the new normal: after years of sometimes frustrating but steadfast outreach, Jasper, a “treatment resistant” US vet who lived on our streets for 45 years, moved into a space of his own.*

Now what? Do a collective victory dance then move on to the next client? This weekend brings frost, so Jasper’s staying put in a room with heat, with a bathroom and a microwave, should be a no-brainer.

—But in the realm of chronic homelessness, it isn’t.

The days, weeks and months immediately after someone is housed are critical to ensuring that the placement sticks. Absent support, the placement could crater. Someone housed after a long time on the streets might simply walk away from that housing, away from a place of his own, back to the streets.

Hey, I’m with you: walking away from a room with clean sheets and a bathroom is hard to imagine. But it happens. Why? Maybe the toilet is broken and he has no idea of how to deal with his landlord and the stench overpowers. Maybe the sight of a full fridge feels a burden, not a relief. Maybe he can’t cope with having ongoing neighbors, or they are having a hard time with him. Or maybe, once she shuts her bedroom door, she feels isolation, rather than solitude.

Remember that scene in The Shawshank Redemption, where Brooks is released from long-term confinement and goes to live in a halfway house, with a job at a nearby grocery store? Looks like his life has taken a tremendous step forward, doesn’t it? He’s out of jail, has his own place and a chance at a future. But remember what happens?

He can’t cope with his new reality, even though from the outside, it sure as heck seems like a better life than prison.

Well, Brooks needed some serious CTI. And in fact, this intensive-support model was created to help newly-released long-term convicts adjust to life “on the outside.” In the last few years, caseworkers in chronic homelessness have embraced and adapted this model, bringing support directly to someone new housed, in spades. Finally accessing independent living in a space of your own is a positive change, no doubt. But it can overwhelm.

“Support.” “Adjust.” Gimme some examples, right? Alert readers of this blog will recall that, once Andrea brought Jasper to his new space, our colleague Mark arrived, “to start the process of supporting Jasper’s transition.” That’s CTI. So Mark, having built a preexisting relationship with Jasper, in anticipation of his housing, now goes to visit Jasper several times each week. Maybe he ensures Jasper’s getting whatever Federal benefits Bethesda Cares helped him secure. Perhaps he brings along some food, or perhaps one of our medical volunteers. Certainly he’ll help Jasper navigate his new community: where’s the local library? A rec center? Medical care?

What Mark also brings is the consistency of the presence of the people who helped him believe this transition was possible. And as Jasper adjusts to his very new lifestyle, as he learns to trust the permanency of his new arrangements, Mark’s visits will taper off. Jasper will be okay. And if he’s not, we’ll be there to help.

Not all prisons are visible, you know?

*In my last post, I should have given a shout-out to our colleagues at Montgomery County Coalition for the Homeless, who were deeply involved in the intricacies of getting Jasper housed. Hats off, partners.