You are here: Home / Library / Gutter Guards Are the Sign of Our Failure As Parents 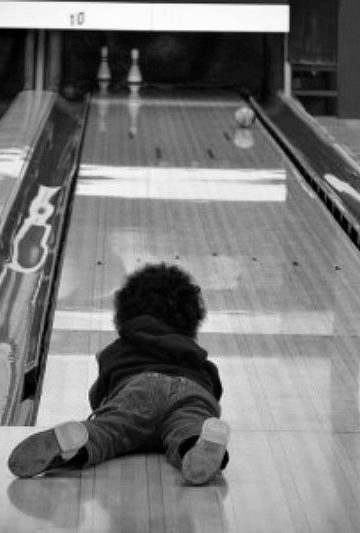 Gutter Guards Are the Sign of Our Failure As Parents.

Truly, they are. I know used that phrase as my heading to this post, but I’ve retyped it as text, because I really mean it.

Here’re my credentials for what I’m about to say:

I have three children, but they are quite far apart, age-wise. My older two are out of the house; my youngest is in third grade.

Thus: I hereby claim the perspective that comes with experience.

So, if you have had children within the last two decades, we’re in the same boat. And I see the demise of our willingness to fail — but then, perchance, to achieve — and to let our children do the same, in the coincident rise of bowling alley gutter guards.

Do you know to what I’m referring? It’s these weird tubey things in bowling alleys, that parents can elect to have placed in the gutters, that prevent children from getting…

You know what a gutter ball means, right?

You with me? That glance down the alley, the thunk of the ball hitting the gutter, the resonant silence of not a single pin falling from what you threw? I remember that, from my childhood. Don’t you? The scores written in grease pencils, projected on a screen above the alley? I hated that

score, but it happened. I’d toss that bowling ball, then shimmy my hips to one side to try to mentally push the ball where I wanted it to go, even after I’d thrown it, watching it clatter down the alley, seeing it tumble to one side and shudder to its rattling grave, despite my entreaties…

You turned back to your friends, shrugged, pantomimed defeat and sipped at your soda. Getting a gutter ball stunk, and I did it a bunch of times, but in never once made me fear I wouldn’t still live a full life.

As an adult, I’ve never been a huge fan of bowling (PhDs in the crowd can discuss the possible trauma of the aforementioned gutter balls), but I did take my older children to partake, on the odd rainy Saturday. And there, I encountered an odd implement: made of metal tubes, it looked kind of like my grandmother’s walker. Its use was, well, also therapeutic: apparently, the parent brought the contraption in front of the alley, aimed it properly, placed a ball on top and the child’s task was simply to push the ball down its chute. Then the ball would roll toward the pins.

Still, I rallied. It seemed an unfair advantage, that ball-aiming-thing, rather than jamming your fingers into those three holes, then hurling a ball towards its uncertain fate. But, hey, time passes. Things change.

Yet I was kind of annoyed.

Those kids got better scores than I did.

And, probably, so did their parents.

You know, the ones wheeling around those ball-rolling-contraptions.

So the children wouldn’t have to heft those tricky balls.

But I was unprepared for, grace to my youngest son, what I now know is the next phase:

I don’t know who invented these, or why, but I do know for sure it was neither patented nor paid for by the 6-year-old whose parents currently set it up for him.

Oh, I get it. Little Jimmy won’t bowl a 300, but he won’t suffer the misery of throwing the ball and having confirm that, well, he doesn’t know how bowl well. On the other hand, well, he maybe won’t know the pleasure of mastering a minor skill.

And, most likely, so will we.