You are here: Home / Library / Homelessness Through the Eyes of a Teen 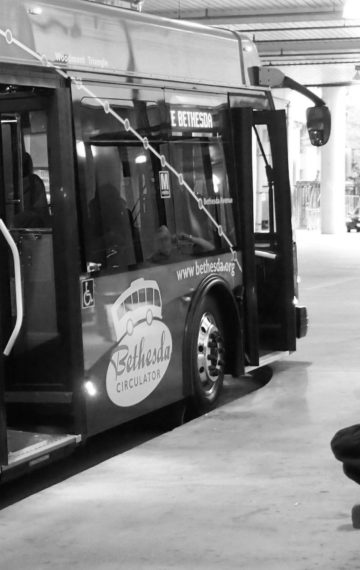 Driving into downtown Bethesda, Maryland earlier today, a panhandler came up to my car window as my teen and I were stopped at a red light. I don’t give money to panhandlers, or (any longer) food, either. What I do hand out are bright orange cards, with Bethesda Cares’ Drop-In Center and meal program information on them: if the panhandler really needs help, the card tells him how to get it.

So I rolled down my window, ignored the blast of cold air that rushed at us and stuck out my hand with the card on it. He took it, said. “Oh, right, Bethesda Cares! I know you guys. I had a card like this, lost it. Thanks!”

“How are you doing in this cold?” I asked. “Where did you sleep last night?”

“My buddy and I are staying up by those towers,” he said, waving off to the right somewhere.

“How are you coping? Do you have enough blankets?” The light would change soon, we were both talking fast.

His face darkened. “No, I don’t. I had some stuff but someone cleared it all out, cops or something.”

I gave him some emergency info, reminded him where he could get a hot meal today and invited him to come by our Drop-In Center. A driver behind me leaned on her horn—kind of a long, obnoxious blare, given that what was holding her up a few seconds was a conversation between two humans—and we drove off.

My daughter, who had heard the exchange, spoke. “That lady in the SUV was incredibly rude. She could have just tapped the horn,” she said. “That guy you were talking to. Someone took all his stuff? Someone stole it or decided that his belongings were an eyesore or something, and just trashed it all?”

She drummed her fingers, spoke again. “I can’t imagine it. I just can’t imagine having to keep constant vigil over everything single thing I own. What does he do with his stuff if goes to the bathroom? When he falls asleep? If this guy leaves his campsite or whatever, he has to carry around blankets with him? Or leave them, but then maybe freeze that night if they’re taken?”

I nodded. I see it at work all the time.

“It’s totally unfair,” she said. “How is he supposed to function? What if he got a job? How could hold down a job if he can’t even leave his stuff? How could he even go interview for it, if he knows he might lose everything but what he’s wearing that day? How is he supposed to do anything, other than sit and watch his stuff? I mean, I guess he could hide it, but that seems pretty lame.”

I nodded again, listening as she worked through some of the horrific logistics of life on the street.

She looked out the window, turned back to me. “There are lots of people with substance abuse issues on the street, right? And some people don’t give money to panhandlers—even the actually homeless ones—because they don’t want them to buy booze, right?”

“Okay, I sort of get that,” she said. “But I sort of don’t. How on can anyone stand in judgment of people living in such misery? How can someone steal from a homeless guy? Or just throw his stuff out? How can someone lean on her car horn when you’re clearly just talking to a guy who might really need some help? What is wrong with people?”

My daughter tossed a lot of questions at me as she wrestled with these issues. I can only hope her questions were rhetorical, though, because I’m mighty short on meaningful answers.