You are here: Home / Library / Managing Your Teens’ Attitude Takes This Shift in Yours 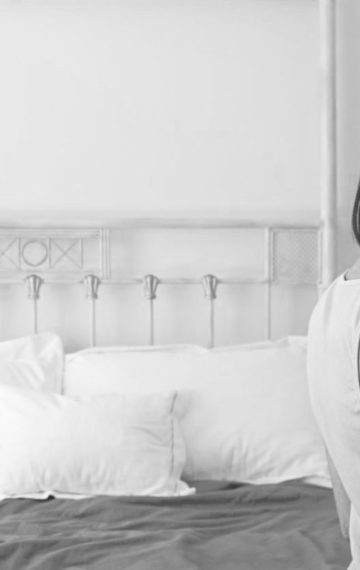 “You never let me do anything! I hate you!” Fists balled, eyes flashing, my 14-year-old daughter stood in our kitchen, screaming at me. I imagined her sentence hanging over our heads, the letters a blood-red Hallowe’en font, dripping, rising, expanding, pulsing.

Her words were a cannonball to my heart, but anything I said would only escalate the exchange. So I tried not to engage and just stood there, gritting my teeth and silent.

Yeah, that didn’t work. Even my clenched teeth gave her a ticket to Sarcasm City.

“Oh, sure. Grit your teeth, Mom. Sure. You’re the one who’s suffering here.”

Oh, angry teens are difficult! Amazing, really, given that we all were them ourselves not that long ago. Yet dealing with a snarky, rude child in a way that doesn’t make things worse is incredibly difficult. At least, it was for me until I had a bit of an epiphany.

Most of the advice I read about conversing with angsty teens was along the lines of “don’t engage” and “don’t take it personally.” Yet I found it extremely difficult not to take a sentence like “You’re the worst mom” personally, given that I was the mom who was the subject of the sentence. I tried though. I’d bite my tongue, ball my fists so my nails dug into my palm, do whatever I could to keep from responding in kind, or even just gently chastising in the name of trying to rein in her behavior.

Even when I didn’t respond to her barbs, I was pretty keyed up. I don’t know whether she could sense my pent-up anger and frustration or whether it was more of a Zen thing in which my negative energy stayed in the room. But neither the times I responded nor the times I kept my mouth firmly shut successfully neutralized the argument.

In a moment of solitude one Saturday afternoon, I found myself leafing through old photo albums, seeking glimpses of the lovely daughter I knew was buried somewhere under all that anger. I found lots of them: baking cookies together, me teaching her to swim, her curled up on my lap while I read to her. Gazing at her open, sunny expression (which I hadn’t seen for months) made me smile and wince at the same time.

I was putting the albums back on the shelf when it hit me. The photos that jumped out at me had the same underlying theme: me, being her mom. Guiding her. Teaching her. Leading by example.

Somewhere along the line, somehow, I’d lost the thread. I guess that while I was busy trying to guard my own flank, I’d forgotten some of the main tasks of parenthood. My job wasn’t to duck my head and scuttle through her teen years. In fact, my job wasn’t (and never had been) about what was best for me, but rather what was best for her.

What was best for her was for her to hear her own words. My tight jaw let her rocket past them. My reactions kept letting her control (and shift) the conversation. Look at the pattern. She’d say something dreadful, to or about me. I’d react, whether with words or a visibly-maintained silence. She’d explode at my reaction, no longer even thinking about what she’d said to provoke it.

I had to trust that her open, sunny core was buried in there somewhere. I wanted her to remember that her words mattered, that they had impact. I needed her to also see the words she’d uttered as I saw them, hanging in the air, dripping blood on the floor between us.

Then, maybe then, she’d start to learn to curb her comments. Because I’d help guide her to see the consequences of her words.

That’s the epiphany that let me change our dynamics. Once I realized that my role in dealing with her anger wasn’t to try to dodge it but rather to let her see its impact, that a big part of parenting remained my obligation to guide her, I was able to truly stay calm. By shifting my focus from protecting myself to helping her, I learned to “not engage.” And I did so not because it was best for me, but because it was best for her.

My job is to teach her.

Slowly, our pattern changed. She’d say something dreadful, to or about me. I’d react calmly. Because I actually felt more calm, showing it was easy. Her words would still hang between us, but as I learned to stop adding my own emotions to our exchanges, I gave her the space to see them, too.

Was it a total cure for her behavior? Of course not. However, more than once, she’d flounce out of the room when I didn’t react to her barbs, but would find me a few hours later to apologize.

Thankfully, those years are behind us and she’s a lovely young adult. I’m pretty sure, though, that the lessons I was finally able to teach her will last for both of us.