You are here: Home / Library / Much Ado About Mayo 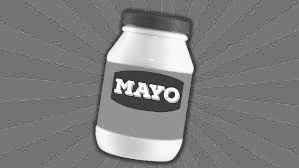 My daughter’s high school sent out an email a few weeks ago, announcing an upcoming day of service for the students and asking if any parents wanted to get involved. I was pretty fast on the reply button, and agreed to address the crowd this past Saturday, and then supervise the making of dozens of lunch bags for Bethesda Cares‘ clients.

I write today not just to applaud a bunch of teens who got up early on a Saturday morning to help, without a single request for “service hours,” but to underscore the importance of a packet of mayonnaise.

I was part of the email thread among five or six of the parents coordinating Saturday’s project. By Thursday, we were down to the wire; luncheon meats were coming, bread had been purchased and someone had remembered to pick up disposable gloves for the food prep. The sticking point came when no one could find the packets of mustard and mayo I had requested, for us to toss into the paper bags.

By this point, the emails were flying fast and furious:

“No time to order from Amazon,” one woman wrote. “I called Target, but they don’t sell them.”

“Has anyone asked a restaurant?” another mused.

“I tried two places, but neither would give us the quantity we need, and they wouldn’t sell them, either.”

My inbox went silent for twenty minutes, then it pinged again:

“Well, I don’t know. I don’t think we’re going to be able to make this part of the plan happen. It’s just too late.”

That’s when I weighed in: “I just called Costco,” I said. “They have ‘em, packs of 200. If anyone can pick them up, whatever we don’t use, I’ll give to our lunch program. I can give you a tax receipt. Trust me, they’ll get used,” I wrote.

I sent that off, thought a second and then went back to my keyboard:

“The mustard and mayo matter more than you may realize. People often think that ‘the homeless’ or ‘the hungry’ should just take what is offered to them, and be grateful for that. Well, that may be true, to a point. But that approach dehumanizes our clients, and does not acknowledge that of course the recipients of our largesse are people, just like us, who have preferences, likes, dislikes…and absolutely both recognize and appreciate when they are treated as such. So this is not much ado about mayonnaise, really. It matters. Thanks.”

My inbox went silent again until one woman confirmed she had picked them up.

The day of the lunch-making, I talked to the students (and parents) about homelessness, about the challenges and humiliations our clients face every day. I talked about how the food they were preparing was important not just because they were feeding our clients’ bodies, but that their efforts, if made with a bit of extra care, would also feed their souls. I explained why including a choice of mustard or mayo for the sandwiches sends a clear signal: “We get that you are human, person-in-need, and that regardless of your current life status, your preferences matter to us.” There is no “us,” there is no “them.”

Well, I tell you, those kids totally got it. Assembled around a long table of supplies, they wrapped the brownies they had made, they washed each piece of fruit, made all the sandwiches, stuffed the bags, pausing to label each one on the outside so the client could choose the type of meat he or she preferred. And a group of girls sat at the end of the table, scribbling furiously with magic markers: My daughter and I had the great satisfaction of driving those bags directly to clients, delivering them directly into the hands of grateful recipients. Note to future donors: turkey was much more popular than ham, and no one asked for ketchup.