You are here: Home / Library / Put an End to Complaining (Even Yours) 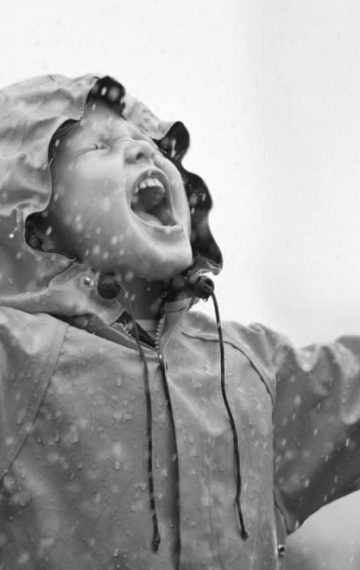 “I wish I’d brought a bigger umbrella,” I mumbled.

“Icy droplets running down my neck. Great.” I muttered.

Standing by the Washington Monument at the March for Science, a cold rain pelted me and my two sons. The downpour was ruining our signs and my mood. After maybe my third complaint, my oldest turned to me and said, “You know what, Mom? We’re all cold and wet. But constantly bringing it up doesn’t help.”

He was right, wasn’t he? Weren’t you kind of annoyed with me as you read those first three lines?

Complaining bums everyone out. In fact, neuroscientists confirm that the more you complain, the more you (literally) rewire your brain toward negativity, which increases your stress levels and damages your body. Sure, there’s the good kind of complaining, leading to positive change, but the bulk of my squawking isn’t that.

On the ride home, I apologized. We discussed it and agreed we could all try to complain less. Like New Year’s resolutions, though, our commitment fizzled out in a matter of days.

The truth of my son’s observation stuck with me, though. I wasn’t willing to let this one go. Thus was born “The No Complaint Zone.” Originally intended just to cut down on the grousing, the NCZ has had an unexpectedly salutary impact on my home and my life, and I invite you to try it in yours.

Here’s how it works: The NCZ comprises the entire planet. No skipping out of town to complain. You do get to share information on your current state of unhappiness. Knowing someone has a headache can be useful. But the kicker is that you only get to mention your discomfort/displeasure/disgust once. The second time you bring it up, you’re complaining. And in our NCZ, that’ll cost you a point, called out on the spot by whomever notices, and then (gleefully) tallied on a sticky note on our fridge.

At the end of the week, the person with the most points has to empty the kitty litter. In my house, avoiding litter duty turns out to be a solid motivator for keeping my children on their toes. Don’t have a kitty? I bet extra screen time or desserts would work, too.

Sadly, the first week, I lost. I’d racked up the most points. I was astonished at how darned often I complained. Tired, stressed, still tired, too much driving and did I mention how tired I am? So many throwaway comments, peppering my day, dropped on whomever was beside me without much thought as to how, or on whom, those words landed. I also started to notice how I felt when people complained to me. (Not great.) And I began to wonder about the behavior I’m modeling for my children.

So going into my second week living in the NCZ, I watched my tongue much more carefully. Once is information, twice is a complaint. I refrained from moaning about traffic and voiced my displeasure about finding the sink full of dirty dishes just once. I did, in fact, win the point tally.

More interesting, though, was the change in my demeanor. When I complain less, my mood seems lighter. When I keep negative thoughts to myself, they dissipate a whole lot faster than when I trot them out as discussion points. The positive impact on my energy has been incrementally building as keeping my gripes to myself is becoming more of a habit.

By week 4, my children’s interest in the NCZ faded and I’m not willing to institute escalating rewards to keep it going. But for me, grumbling less seems to let me smile more. So with or without my children, I think I’ll going to stay in the zone. I hope I see you there.