You are here: Home / Library / Sometimes Your Clothing’s Disposable Even If You’d Rather Keep It 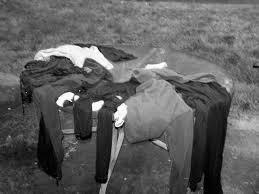 Last Tuesday the rain in DC was unrelenting. It was the day on which Long Island saw 13 inches of rain; though not as badly off, we were deluged too. Because Bethesda Cares‘ Drop-In Center for the homeless not only provides access to our services but also serves as a respite from the weather, that day our Center was understandably full of people coming in and shaking off coats.

I saw one man rather mournfully inspecting the contents a worn blue back-pack that I suspect held most of his possessions. Reaching in to the top of the bag, he pulled out a pair of dark socks and brought them over to a garbage can. I saw him literally squeeze water out of them before he shook his head and dropped them into the bin.

I was kind of bummed to see him tossing out the socks, but really, what else could he have done with them? If you’re living behind a dumpster, what do you do when your stuff gets soaked? And come to think of it, what you do with those crucial items that got you through a brutal winter (think winter coat, blanket) but when summer comes you don’t have a closet in which to store them?

The reality of it is that people on the street have to throw out a lot of stuff. Frankly, I don’t see that they have a meaningful choice about that, even if when the items are something of value to them.

Think about it. Your spare pair of socks gets soaked right through the fabric of your backpack? You don’t have a clothes drier or even a reliable public place in which you can safely leave them out to dry (weather permitting). Toss.

The seam on the pants you’ve been wearing every day for a month finally gives out? You don’t have a needle and thread or probably the interest in the repair work. Toss.

You have a good winter coat but summer’s coming and you won’t need it for months? It’s too heavy to cart around with you everywhere you go and likely to get soaked and intolerably smelly before you’ll need it again anyway. Toss.

But looking toward the future isn’t how you’re living, anyway. If you are sleeping in a park you are thinking, literally, about surviving the night stretching ahead of you. You’re worried about your safety and the safety of your belongings. You’re not debating what you’ll wear six months down the road.

For someone who is homeless, planning means coping with the immediate future. From where is the next meal coming? Will he find a safe corner in which to shut his eyes that night? Is that cut on his leg getting infected, and if it is what are his options if he wants to seek medication?

Planning months or even weeks ahead is just another of the many luxuries our clients simply do not have.