You are here: Home / Library / Therapy Helped Me Let My Teen Son Go So I Could Hold Him Close 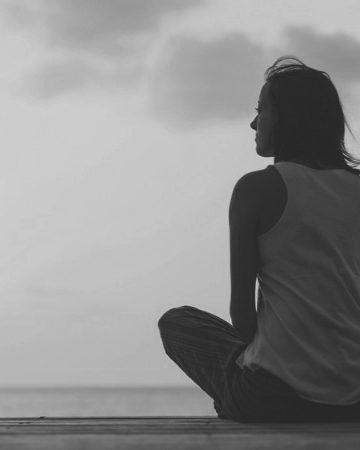 “I’m going to ask Stacy to marry me,” said my 22-year-old son, Richard, as we sat in a coffee shop. You know the expression, “my life flashed before my eyes”? Well, right then, my life did; it included a lot of his.

May I have a popsicle?
Going to James’, okay?
Stacy and I are getting serious.

He’d gone from asking my permission to asking my opinion to telling me his decisions.  He’d sent me a steady message: Step back. I’ve got this.

Took me a long time to hear him.

When I was a child, my parents were black and white in their decisions.

Actions were either good or bad for you, end of story. Contravention brought a verbal smack, more lasting than a physical one.

You snuck cookies? You should be ashamed of yourself.
How dare you miss curfew?
Your father and I unimpressed with your grades.

I was well-behaved, but anxious. The creaking basement stairs could swallow me. We might end up homeless, our house boarded shut. One day, I’d go blind. I couldn’t distinguish rational fears from irrational, so I worried about them all. However, I laid none of my unhappiness on my parents’ doorstep.

From Richard’s birth, I automatically parented like mine had. And boy, I parented up a storm, crawling on my knees to childproof our townhouse, echoing the black and white certainty of my childhood.

I wasn’t rigid, but I was deliberate. There was good, and there was bad. He asked, I decided. Contravention triggered my tart displeasure, although I avoided shaming. When I hit puberty, Mom watched what I ate, telling me when I’d had enough. When I got busted with bourbon at an Aerosmith concert, my father listed the ways I’d disappointed him.

Now, I was rearing a child who was well-fed, -read and -rested. And, bonus! The more I focused on him, the less I dwelled on testing our dishware for lead or checking our drywall for toxic mold.

By his tween years, though, Richard was increasingly unhappy. Faced with a gift card and a toy store, he’d fall apart, unable to make a choice. He’d seek approval for his choice of a video, even among those he owned.

Thinking his unhappiness rooted internally, I cheered him up and on. I praised him for drying the dishes. I covered the refrigerator with his drawings. I went to his baseball games and applauded. None of it helped. He awoke each morning in tears, reluctant to even get out of bed.

I told myself he was sensitive. Going through a phase, with garden-variety angst. But the lower his happiness, the higher my anxieties. I’d lie awake at night, heart pounding, certain stinkbugs were slipping down my chimney, laying microscopic eggs on my toothbrush. I’d run through the house ahead of vacations, yanking plugs from outlets, certain our electronics would combust in my absence.

He was 11 when the bulb finally lit. I took him to a new summer day-camp, held in an elementary school right near our house. But when we got there, he refused to go in.

“Don’t make me go in,” he pleaded, fat tears on his cheeks. “Don’t make me. Please.” He couldn’t, or wouldn’t, explain. I took him home, thinking of that airplane air-pressure mask rule: put yours on, before helping your child. I needed help, to help him.

I found a therapist.

During that first session, she asked about my childhood, college, marriage. Annoyed—I wanted tension-lowering parlor tricks –I answered anyway. She concluded by saying, “Enmeshed families create high anxiety children.” Instead of offering concrete tools, she suggested another appointment.

I stormed out. What did she mean, I was “enmeshed”? How could caring deeply about Richard make him anxious? Was she blaming me for Richard’s struggles? What about his dad’s role? And how long was this therapy thing going to take, anyway?

Three days later I realized I wasn’t only the hovering parent, but also the high-anxiety (adult) child. Middle-aged, I still answered to my parents.

My mommy and daddy no longer gave or withheld permission. But they still gave or withheld their approval, and I still soaked it up. But even more than craving their affirmation, I feared their disapproval.

If I mentioned, say, disinterest in driving 9 hours for a family event, Dad would lash out at me, and Mom would call me, in tears. Each described the pain I was inflicting on the other parent.

“You’ve disappointed your mother. How can you do this to her?”

“You’re hurting your father. No one lives forever, you know.”

Shaming isn’t an end unto itself, but rather a means of enforcing behavior. Its power is its underlying threat: Do what we say, or we won’t love you. My stomach clenching, my hands trembling, I’d get in the car.

I’d do anything to avoid those feelings. Oh, I wanted say, “Step back. I’ve got this.” But that demand’s emotional price—her tears, his anger, their abandonment—was more than I could bear. So I didn’t make it.

I was doing something similar to Richard. By giving or withholding approval of what he said, ate or wore, I entwined his emotions with mine. I was MOMMY, all caps. His desires had no chance.

Counseling taught me to back off, and he improved. He joined an after-school club, started walking alone to nearby shops. We both breathed easier, but not easily enough.

Keeping my mouth shut was superficial. Like my parents, I still monitored Richard’s every move and reacted, albeit less audibly, when his choices differed from mine. Despite my silence, he’d hesitate when reaching for a cookie, reading my posture, my facial expressions.

After all, I’d trained him to read my mind.  To un-mesh us, I’d have to change my thoughts.

First, I’d have to redefine myself. Being Richard’s Mommy was my life, for every moment of his. I’d supervised homework, volunteered at school, baked wholesome snacks. Who was I, beyond Mommy?

Second, I had to genuinely respect his choices, even if he one day skipped a family event. Mommyhood wasn’t about making decisions for him, but rather about teaching him to make his own.

Finally, I had to contemplate aging. If he grew up, I’d grow old.

Changing took years and I backslid. But the more I saw Richard take risks, the more resolved I was to change. For him.

That’s when I started wishing my parents would change, too. For me.

Don’t you need a jacket?

I’ve told them I need Mom and Dad, but they’re stuck at Mommy and Daddy. So I don’t see them much.

Back to the coffee shop! My son’s awaiting my response.

They’re so young to marry.

Richard’s life isn’t mine. His life never was mine.

“Richard. You know you don’t need my permission. Or my approval.”