You are here: Home / Library / We’re at the Point in the Trump Era in which Strangers in Factories Are Sending Secret Messages 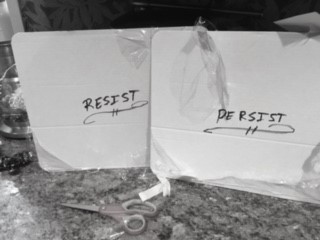 Last Thursday, I found that single word scrawled in black Sharpie on the cardboard inside a package of photos I’d ordered. Odd, I thought, turning over the first of my photos.

The pictures were of me with my children, holding signs at the recent Women’s March, smiling and determined amidst a sea of humanity. I glanced again at the word. Was it intended for me? Vendors don’t send secret messages to customers. And photography places aren’t supposed to look at the content of what I’ve ordered, are they?

I lifted the second pile of photos—me with my children at the March for Science, still smiling, still determined, still amidst a sea of humanity—from a second piece of cardboard. There, in the same hand, another word:

The words were for me. A photography company’s employee whom I’d never meet had probably broken corporate policy in sending them.

When I was in maybe third grade, a teacher assigned our class to create messages in bottles. We were to take glass bottles, decorate them brightly, write our messages on scraps of paper, stuff in the messages in and seal the bottles as cleverly as we could. I used melted wax, rubber cement glue and a top coat of clear nail polish. On a subsequent field trip, we would toss them off a boat and wait to hear back.

Alone in my bedroom, I had written my message. In the quiet of the night, as I pictured the stranger who would find my bottle, the note was more than a school assignment. I looked out my window at the vast darkness, the far-away stars, the scale of the universe dwarfing me. Torn from my heart, my message was a plea to the unknown:

Hear me. Let me know you’re out there, too. I don’t want to be alone.

That stranger would read my message. Without even knowing me, they would care.

Weeks went by, then months. No one ever replied to my message-in-a-bottle and I eventually forgot about the whole exercise.

That is, until I opened the package last week, when I was suddenly again 9. Except that now, I can see what I could not, then: the power of the exercise wasn’t in the anticipation of an answer but rather in the hopefulness of casting my words out to the universe. The act of writing my message, of fantasizing that someone might find it, of that knowing someone could find it, was connection enough.

In that spirit, I’m not going to try to find out who sent me the note from the photography place.

Maybe I’m not even supposed to.

I read that employee’s message. Without even knowing them, I care. Today, alone in my study, I’m typing this message. It’s to you.

Hear me. Let me know you’re out there, too. I don’t want to be alone.

This article first appeared in WritersResist.com, June 22, 2017, and appears in Writers Resist: The Anthology 2018