You are here: Home / Library / When You Can’t Just ‘Pass Go and Collect $200’: Minimum Wage and Affordable Housing 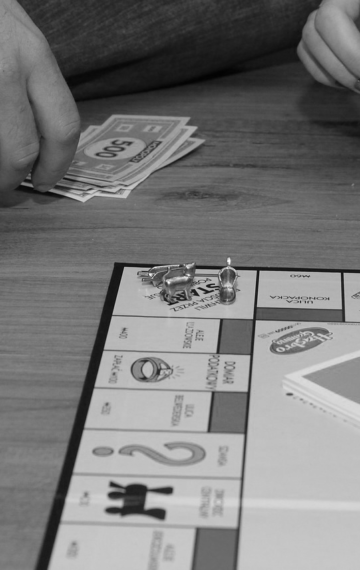 Some years ago, when my daughter was maybe 8 years old, she took part in a social services workshop at religious school. I was one of the moms lurking in the background while another woman ran the show.

The leader started by leading the children through some simple math:

“Jane earns the Maryland minimum wage of $7.25 an hour,” she began. (Maybe it was a buck/hour less back then, but let’s bump it up to today’s numbers for this post; the raise makes no significant difference anyway.) “How much does she earn in a week?”

A muddled discussion followed as the children tried to figure out how many hours comprise a work week. The class settled on 40. I resisted the urge to raise my hand to explain that the U.S. Department of Labor says that “bona fide meal periods…are not work time and are not compensable,” so the exercise continued uninterrupted.

My daughter was first out of the box: “$290 dollars a week!” she exclaimed. The children oohed and ahhed at the salary. “That’s a lot of Legos,” one boy stated firmly.

“It is indeed!” she said to the boy. “Now, how much does Jane earn per year?”

“Holy cow,” the class collectively shouted. “That’s $15,080 a year!” As the leader expected, the magnitude of the number awed the children.

From a satchel, she next removed stacks of Monopoly money, each with a green rubber band around $15,080 of currency. She handed one to each child. “Okay. The average rent for a low-end studio apartment — that’s one room, no bedrooms — in Montgomery County is $900 per month. Figure out what rent costs per year, and take that cash out of your piles, please.”

The leader continued the activity as you might predict, talking the students through (and subtracting the cost of) food, utilities and other expenses, then swapping some variables like adding in a child, and raising the salary by a dollar an hour.

The children saw quickly how very unlikely it was that that fictional child would have the new iPhone 6. Or maybe even lunch.

What Happens When the Money Isn’t “Pretend”?

A slight, soft-spoken middle-aged woman, “Rosalind” came to Bethesda Cares to talk to our Housing Stabilization Counselor. Our counselor runs a program that provides temporary financial assistance for clients facing eviction or threatened utility cut-offs; the idea behind the program is that, well, we’d like people in housing to stay there.

Rosalind was in dire financial straits and under terrible stress. Her story is depressingly typical: a single mom, she worked cleaning houses, for minimum wage. She needed time off work to take care of a sick child. Rather than agreeing, her company fired her.

Despite unemployment checks, her bills rapidly overtook her. She was on the verge of losing her small apartment, and had no family to whom she could turn.

Rosalind sat in our office, seeking a path to keeping herself and her son housed while she looked for work. She had been trying to find a new job, she explained, but that takes time, which she did not have. She then lowered her voice, leaned forward, and spoke in a whisper. “I heard that I can sell a kidney for a lot of money,” she said. “Do you know if this is true?”

I wish I could tell you that our counselor was shocked. She wasn’t. She’s heard it before.

The current median income in Montgomery County, Maryland is a whopping $102,000. An individual or family with an income below 30 percent of the median family income is at risk of homelessness; thus, someone whose household income is around $30,000 (heck, let’s presuppose two full-time minimum-wage-earners) could easily find himself tipping from financial stress into true crisis.

My daughter is now a teen, and works at a local pastry shop, earning slightly above minimum wage. She’s still first out of the box when it comes to math problems, and after skimming a draft of this post, she noted that to buy just one of the admittedly pricey cakes she sells, at $38/per before tax, she would have to work for five hours.

She already “gets” that minimum wage is a joke. Thank heavens she does not yet have to confront the cost of housing.

In my last post, I asked you to consider the health care costs of leaving someone unsheltered. This time, I ask you to figure out how Jane — or Rosalind — can possibly survive in the yawning chasm between minimum wage and affordable housing.