You are here: Home / Library / When Your Daughter Wants to Protest 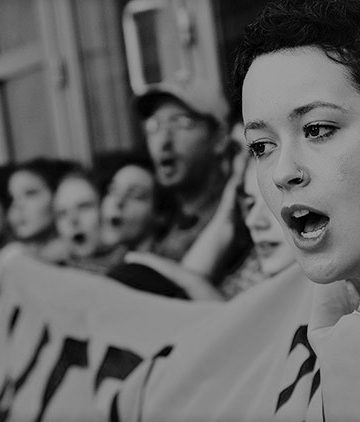 Note from original post: Portrait of a Young Activist: Amy Freeman’s daughter protesting Trump’s immigration policies. She was arrested along with other activists. Freeman wrote on Twitter, “So my kid got arrested yesterday protesting a senseless #deportation. The protest worked! The parents got a stay.”

“Just want to let you know so you don’t freak out later, Mom,” my 20-year-old daughter said on the phone, “I might get arrested tomorrow.”

I suppose I should have expected a call like this. She organized her first protest at 8 years old, petitioning my neighbors to boycott products from Sudan over the genocide in Darfur. (No one had the heart to tell her the U.S. doesn’t import a lot of Sudanese products.) Now she’s learned of an elderly couple facing deportation after 24 years of living peaceably in her community, and she joined a group planning to block the entrance to the relevant Immigration and Customs Enforcement building. I guess she decided rallies, petitions, angry Facebook posts, and righteous tweets aren’t getting the job done.

But was this a parenting decision? Was she asking for me to give or deny permission? Can I even do that with a college junior?

On one hand: I want her to follow her head and heart, and pursue that which she thinks is right. I gotta say that I share her beliefs. But should I egg her on?

On the other hand: I’ve nurtured her through schooling, moving mindfully toward a successful career. How would an arrest impact her future? Is it selfish to care about her shining future in the face of that couple’s dark one?

On another hand: She’s white. What about the people of color, often arrested for, well, existing?

On another other hand: These rallies can spiral way out of control.

On the final hand: Picturing my daughter in jail is terrifying. You never know how an irate cop might treat someone once they’re in the system, or what charges they might ultimately face. So I tried to walk the line between supporting her as an adult considering a risky action I basically admire, versus my maternal obligation as a behavioral gatekeeper. Here’s how our conversation went down:

“Yes,” she responded. “We talked through what constitutes resisting arrest. I need to bring an ID. The police are supposed to give us three warnings to leave, and I’m not supposed to go limp if they come for me.”

“Hmm. Sounds like you’ve looked into this,” I said reluctantly. “But how can you be sure your protest won’t injure innocent bystanders? Someone died from Chris Christie’s idiotic highway block — not that that was a protest. But what if you’re blocking an immigrant from a vital transaction?”

“We thought of that. There’s a back door people can use if they need to. Our act is symbolic.”

“Do you have reason to believe what you’re doing will make an impact?”

“Yep. There was a similar situation and protest; the publicity got the family a two-year reprieve to sort things out.”

“Well, that’s a good result,” I answered cautiously. “But you need to take a look at your own life too. What are the possible consequences from your actions?”

“I’ll be looking at misdemeanor, punishable with community service, then expunged from my record. I have a friend taking notes for me in the class I’ll miss.” (I have to hand it to her — she’s thorough.)

“Ahem. What’s this going to cost me in legal fees?” I asked.

“Nothing. I won’t need representation for a misdemeanor.”

“Felonies are a problem, though,” I said. “Conviction could affect your career for your whole life. So no felonies, OK?”

“Yes, Mother. I promise. I will not commit a felony.”

“Are you sure you know what you’re doing? Some of these protests have gotten pretty terrifying.”

“Point taken,” I said, then asked, “Would you still do this if I asked you not to?”

There it was: the parenting crossroads. Did she secretly want me to tell her not to go? Is that why she called in the first place? If I say yes, what exactly am I endorsing? If I say no, am I squelching her voice?

In the end, deciding what to say was no different from the thousands of other cost-slash-benefit analyses I’ve made as a parent. You look at the potential risk to her health and safety, weighed against the possible upside to whatever she wants to do.

Cost: possible arrest. Benefit: helping avert deportation. Standing up for her beliefs. Not such a hard decision after all.

On the upside, if she’s arrested, at least she can make her one phone call to me.

This article first appeared in The Advocate, March 2018