You are here: Home / Library / Why I Didn’t Run From My Rapist, Why I Couldn’t 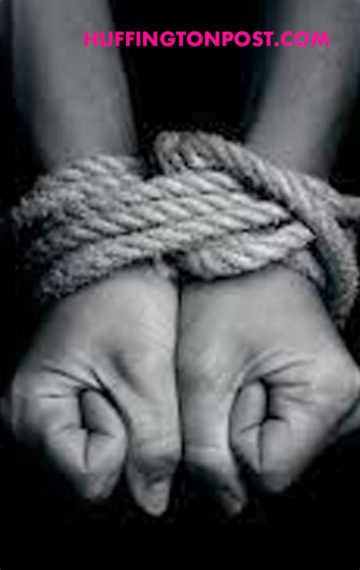 I awake alone in my dorm room, step over a man’s crumpled boxer shorts and head to my shared bathroom on unsteady legs. I pull down my sweatpants, sit on the toilet and look down at my inner thighs. That’s when I see the bruises. Purple, red, livid, shaped like handprints.

I don’t know how I got them.

Shaking, I return to my room. I call my sister, who lives nearby. She rushes over. I tell her some details of the night before, I show her the marks. Blanching, she tells me to get my shoes on. She calls a cab to take me to the ER for a rape kit.

For years after it happened, I couldn’t bring myself to utter the word “rape.” The sounds would clog my throat, choking me, making my breath a stutter. Decades later, I still have trouble putting those four letters in that order even to type this sentence.

I told myself that speaking the word out loud would trigger the trauma. That using it would make concrete what I didn’t want to acknowledge, what I refused to absorb. Even thinking that word had the power to submerge me in waves of confusion and shame.

In the ER, I’m naked from the waist down, lying on a gurney in a tiny room jammed with medical supplies. My feet press into cold metal stirrups, legs splayed wide. Two women in white coats stand beside me. One takes notes on a clipboard as the other, running a comb through my pubic hair, murmurs her findings.

“Dried fluids,” I hear. They take Polaroid pictures of the bruises. Without knocking, a doctor yanks open the door, ostentatiously ignoring me as he searches a cabinet. “Need syringes,” he mumbles as I struggle to sit up, sputtering my humiliation. The women hustle him into the hall but five minutes later another man does the same thing. This time, I jerk myself up, yank my knees together. I am sobbing.

One of the women promises this won’t happen again. She leaves the room, returns after five minutes or so. My sister tells me later that the receptionist put crime scene tape over the door so no one else would barge in.

“OK, Amy. Tell us what happened,” one woman says.

“You’re safe now. Just tell us who did this to you,” the other adds.

Finally, they let me get dressed and I leave.

I do remember some things, but I’m not going to share any details, one especially. Not now, after the men burst in. Probably not even before.

I remember him walking me home from a party. Him kissing me. Me pushing him away. Saying no, I have a boyfriend. Him trying again. Me refusing, again. His eyes darkening as his hand clamped my elbow, hard. I know that I raised my head to the night sky, my mind swirling with the wet, heavy snowflakes that had just started drifting down. Fingers digging into my arm, he propelled me to my room. My mind went blank.

I still don’t know how we got into my room, how my clothes came off or how I came to be lying in bed with him on top of me but when my brain sparked back to life, that’s where I was, his breath hot on my ear as he hissed at me.

“What kind of game did you think you were playing?”

“You know you wanted this.”

I hadn’t wanted this and I hadn’t been playing any games. My inner thighs, my ribs, my upper arms were throbbing in pain. As he grunted and thrusted, I pleaded.

But I didn’t ask him to stop. Instead, I pleaded for the chance to get my birth control.

Acquiescing, he got off me. I rose and, trembling, went to my dresser for my diaphragm. I put it in and, on autopilot, returned to the bed.

He didn’t have a gun or a knife or hands around my throat. I could have gotten out of that room. But I didn’t.

A week later, home for winter break, I realize my sister has told my parents what happened to me, or at least as much as she knows. They treat me like I am recovering from a long illness, speaking in hushed tones and offering me soup.

Late that night, unable to sleep, I pad down to the kitchen to make some tea. I hear their voices and pause outside the door to listen. “ … No point in pressing charges, they’ll probably think she was asking for it,” my dad is saying. I hear my mom mutter in agreement.

It was the 1980s. No meant yes. A short skirt was an invitation. And maybe, you know, you shouldn’t have drunk so much.

Date rape wasn’t even a concept, much less a discussion. If you were in a room with a guy you knew and were maybe even attracted to and sex was happening, you probably wanted it, even if you’d murmured, “No, please, don’t.” Even if you’d shouted it. “Rape” happened in dark alleys, at knifepoint or with fists, not in a dorm with a classmate who kept you tethered only with angry words.

There were no voices of dissent, in my home or my life, to which I could turn.

Yet even without a blade at my throat, I couldn’t have walked out of that room.

My survival instinct had been honed not to protect my body from physical pain, but to shield my mind from emotional pain. I was raised in a household where putting my needs above those of my parents had a terrible emotional price. Doing what my parents instructed — or simply asked ― was rewarded as a demonstration of love. My father’s desires in particular were to be heeded.

Failure to meet their demands meant my father would lash out at me, angry and hurt; my mother would withdraw from me, sad and hurt. If I stood up for myself, I was unloving, unkind. I was terrified that if I didn’t do what they wanted me to, they wouldn’t love me back. As a child, as a teen, that icy fear of abandonment left me heartsick and panicked, which I just could not tolerate. So I buried deep the access to my own needs, ideas and desires. I readily ceded control to those I thought had more power than I. Particularly men.

My upbringing, of course, wasn’t in a vacuum; we’re all products of the eras in which we are raised. For me, that was the 1960s and ’70s. Second-wave feminism was just getting started and parents still taught children — their daughters and their sons ― that “good girls” were compliant and self-sacrificing. That messaging was reinforced everywhere, from TV (you’ve seen the mom from ”Happy Days”) to advertising (think about Betty Crocker’s demure, restrained smile).

Little wonder that female “fight or flight” responses — mine ― were so dulled. It wasn’t until years later that I understood there’s another natural biological response to danger: freeze. Picture that famous deer in the headlights. It’s not fighting or fleeing, right? It’s unable to protect itself. Faced with the threat of imminent bodily harm, neither the deer nor I had the training or reflexes to respond with anything other than paralysis.

That night, that guy who wanted to have sex with me had control over me because I was programmed to avoid the pain of defiance; leaving the room would have been noncompliance. I was conditioned to be a “good girl” — “Now, let’s just do what the nice man wants.” What shamed me then and saddens me now is that I didn’t even consider, and then reject, the idea of running away. That thought never even crossed my mind.

So what really happened that night? Was what happened rape or an unpleasant encounter from which I could have, should have, run away? Was I a victim? Am I to blame?

Does the way in which I think of that night even matter anymore?

It’s taken me 32 years to appreciate that how we categorize events profoundly affects how we understand ourselves. Someone dead is no more or less deceased because of how the death came to be, but whether we call it murder, suicide or an accident drives how it affects us.

I don’t remember more than the elbow grab, my bruised body and my return to miserable consciousness with his penis inside me. Those memories, though, are enough for me to condemn him. It was rape.

But for years, I’ve struggled with the guilt of the moment I didn’t run away. I’ve wondered whether getting that diaphragm somehow diluted what he did, serving as some kind of retroactive agreement. Whether returning to that bed so he could finish what he started turned rape into something consensual.

I’ve blamed myself for decades. I’ve let my soul simmer in a deep, burning shame. And I’m tired of carrying blame that doesn’t belong to me.

The woman I am now would have kicked that guy in the nuts and run screaming from that room, naked or not. It’s hard to fathom now that those options didn’t occur to me.

She deserves it. Her fetters were invisible, but they were real.